Snow Day: Take Two! Last snow day I made a batch of french toast with caramelized bananas, raisins, and honey. This time, more snow and ice. More eggs, milk, and bread. Fridge is dwindling. Husband is hungry. Claire needs an indoor project. We still have power (thank the Lord).

All this = the need to up my game. None of this lame french toast stuff. This time, we’ll do another French recipe (seriously, what is it about those Frenchmen and their yummy breakfasts?) but we’ll do crêpes. For those of you who aren’t familiar with the heavenliness of these, crêpes are a very thin pancake that one fills with fruit, yogurt, meat, greens, cheese… basically anything in the world you could possibly be in the mood for. Actually, my very first dish cooked for Ben was an assortment of brunch crêpes! Pictured below 🙂 Ohhh, how young and inexperienced in the kitchen I was. I served them with very overcooked scrambled eggs, but I have to say I did a good job with the crêpes. And they’re not easy to do! I think I did a few ham and cheese, one with cottage cheese and berries, and one with PB and banana.

Okay, so I didn’t have the nice camera I do now… but pretty good for my first meal ever, right? It was the thought that counted. And Ben loved them! Sweet memories of our dating years and his visits to Duke while he was in grad school at CMU.

This morning I thought to myself, “hey- I have nothing to do, and lots of leftovers to use up! Why not make crêpes?” Yes, they’re a bit high maintenance, but since I had the time, I went for it. I decided to go in the savory direction rather than sweet (based on a poll that some of you may have seen on my Facebook page) and fill them with different types of savory things I already had on hand.

First I had to make the batter, which is a simple mixture of flour, milk, eggs, water, salt, and butter. Couldn’t be easier. The trick is to get the batter nice and even (lumps are not okay like they are in pancakes, so keep whisking even after you start cooking them!). The batter should be very thin, because when you spread it in the pan, it spreads really quickly onto the bottom- which is crucial because these babies cook SO FAST! One flip after about a minute and you’re done. Also, make sure to coat your pan with cooking spray between each crêpe, and make sure the pan doesn’t get too hot, or else you’ll have burnt crêpes and the fire department trudging through the snow because your smoke detector won’t shut off and the neighbors called 911. If the oil starts to burn, turn down the heat a bit and dab off the burnt oil with a dry paper towel.

Then the fun part. I made 4 combos: 1) hummus/ham/spinach/cheddar cheese; 2) leftover fondue cheese (gruyere and fontina blend), more ham, fresh parsley, and some pepper; 3) quinoa salad filling (leftover from last weekend, dijon mustard, chopped broccoli, parsley, feta, and balsamic drizzle); and last but not least, since it’s a classic and SO GOOD, 4) PB, banana, and raisin drizzled with honey and sprinkled with cinnamon.

It’s easiest to just fill one half of the crêpe, and to not get overzealous with how much you try to pack in. It won’t taste better, I promise. You’ll be left with filling spilling out of every possible direction, onto your fingers, all over your floor… not sexy. And crêpes should definitely have some sex appeal. 🙂

For the first three that were filled with savory goodness, I baked at 300 degrees for about 8 minutes, until the crêpes got nice and crispy and the cheese had melted nicely. No need to do this for the PB & banana, unless you really want your peanut butter melty.

Basically, you can have fun with these! After all, it’s Snowmageddon! Who knows where we’ll be tomorrow!? Okay, we will probably still be in the exact same place, doing the exact same thing. Because we can’t get out our door. But it’s still a good day to live like it’s your last 🙂 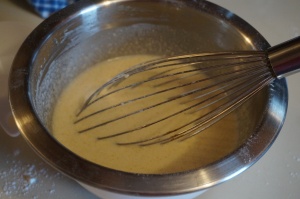 Batter all mixed up and ready to pan-fry

Cook for about 1 minute on each side, until they look just like this! (air bubbles are okay) 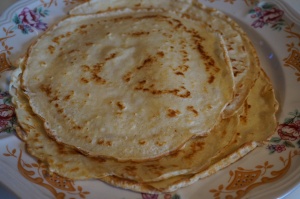 Crêpes all done and ready to be filled! You can stick them in the fridge or freeze them for filling later!

A perfect assortment of crêpes. They’ll only get better from here!

An assortment of savory fillings. 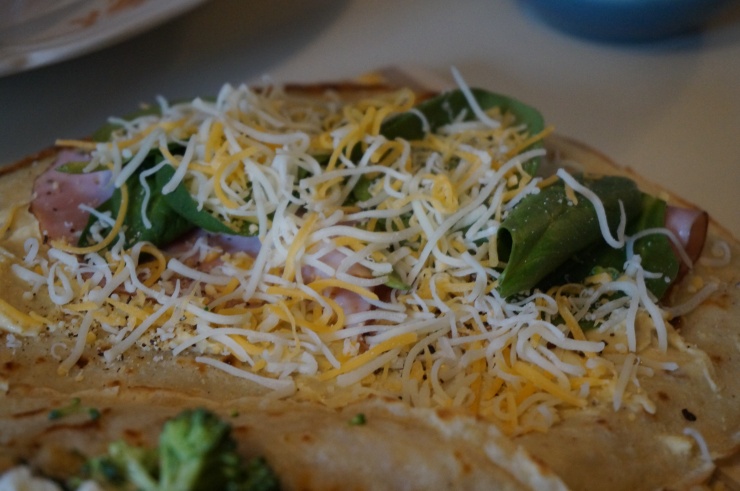 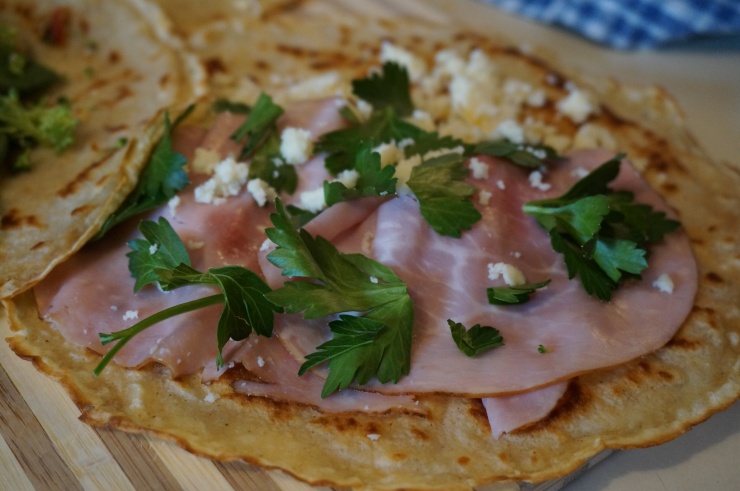 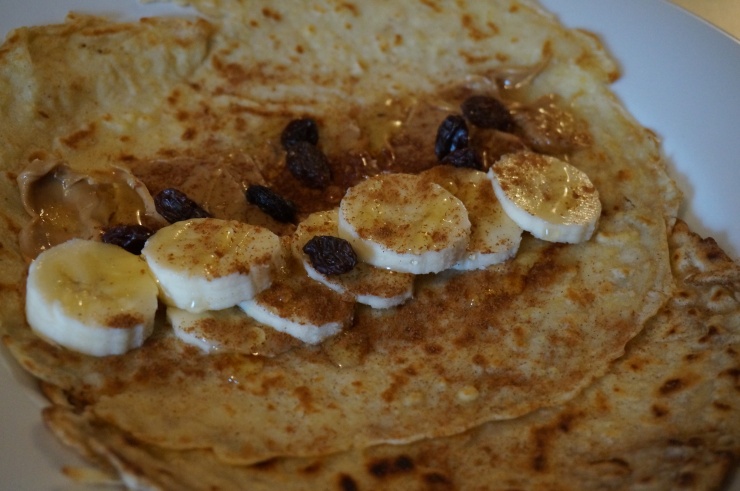 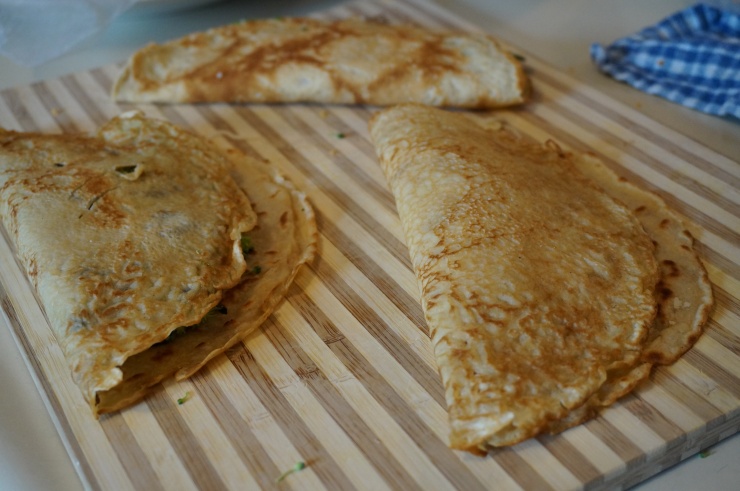 Fold them in half, or quarters if you can. 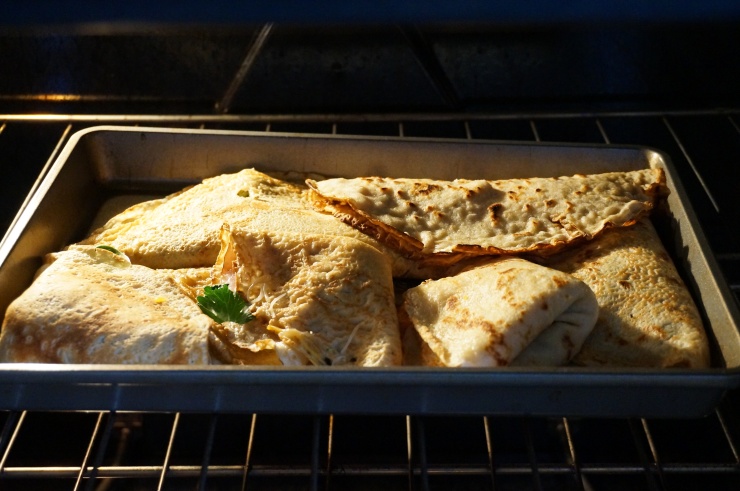 Bake at 300 degrees for 8 minutes or so, until crispy and cheese is melted.

Savory “Snowmageddon” Crêpes
Prep time: 20 mins
Cook time: 8 mins
Total time: 28 mins
Serves: 6-8
An easy recipe for French crêpes- fill them with something sweet or something savory, or freeze them for your next snow day!
Ingredients
Instructions

View all posts by Claire